What is a Cross-Functional Agile Team? 8 Benefits of Hiring One

In today’s competitive era, businesses must become more nimble than ever before.

For instance, digital transformation requires organizations to adapt to change more rapidly. However, the pandemic emphasized the necessity to transform for an even more extreme degree of agility.

Without the proper change management mindset and cross-functional agile teams, becoming agile is nearly impossible. When an organization becomes agile, it benefits both the business, its employees, and its customers.

What are Cross-Functional Agile Teams? 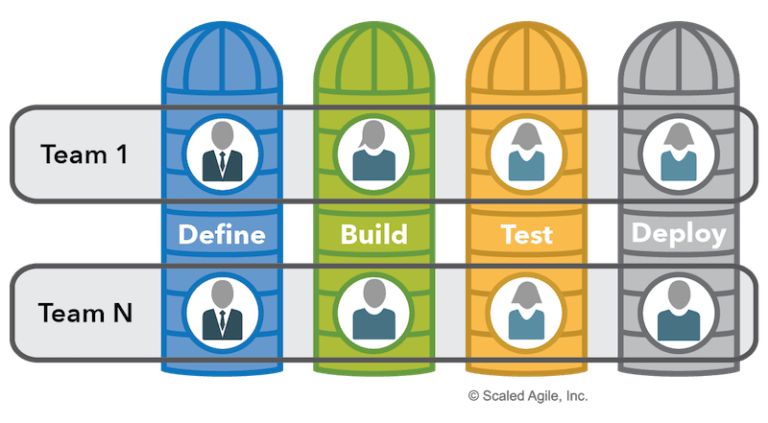 Traditionally, with waterfall, stakeholders create requirements that are then passed on to different teams to complete throughout the project timeline, causing information silos, reducing flexibility, and often resulting in more expensive solutions. Cross-functional teams avoid these problems by working together from the very beginning of the project.

However, solution delivery with the agile framework in place requires a broad range of expertise. Technical teams can create, test, and, if applicable, deploy a solution element. But in order to do that, the scrum team requires guidance. This is where the two speciality roles of cross-functional agile teams come into play.

Every cross-functional agile team includes a product owner and a scrum master that guides the team throughout the development process.

As the name suggests, product owners are responsible for driving the development of a product. This person prioritizes product requirements, team backlog, and features in order to maximize return on investment. The product owner assesses the product based on how well it satisfies the end goals.

The scrum lead focuses on the team and project timeline rather than the product itself. This person does not manage the team; rather, they assist it by removing barriers and safeguarding the team from outside interference. The scrum lead tends to be an expert in agile development and uses that knowledge to guide the team, product owner, and even the company as a whole.

The rest of the scrum team is made up of everyone necessary to get the job done. In a traditional agile development team, software engineers, architects, programmers, analysts, system administrators, QA experts, and testers would all be present.

However, with the WebOps approach, marketers, designers, content specialists, and business stakeholders might also be present, in addition to those same people.
The structure and methods of operations make cross-functional agile teams different from other development approaches.

But what benefits can CTOs and businesses, in general, expect from these teams?

Organizations can benefit from cross-functional, agile teams in the following ways:

In this digital world, software companies aren’t the only ones producing technology-powered products and solutions. In fact, there’s a growing realization that software is driving everything. This software-first mentality comes with the realization that a company’s applications should serve as a vehicle for accomplishing the organization’s goals.

Historically, there has been a disconnect between business and IT, resulting in many applications that didn’t meet business requirements. Conversely, application developers didn’t understand the business context in which they were working.

As a result, for example, there is no opportunity to just do one’s own tiny part, such as coding software and then sending it to testing and operating. Product owners are being positioned at the center of the universe in company groups organized into pods.

Hence, within cross-functional agile teams, people are now accountable and have ownership of their work. All of this improves employee morale.

Slow value delivery is caused by the Waterfall methodology’s reliance on silos and handoffs. Each team member is responsible for an aspect of a project like testing software, where none of the team members have visibility into what the others are doing. While the different functions may work to improve their own productivity, overall productivity is not as boosted.

Companies that grasp the importance of working across the organization can now deliver value faster by shifting to cross-functional agile teams. Experts believe that if implemented the right way, where the organization has the right leadership clarity and alignment, they get better and faster outcomes and better employee experience.

Many employees spend a lot of time in meetings, and most of them blame meetings for their unproductivity. In fact, a survey conducted by Harvard Business Review of senior managers in a variety of sectors revealed the following:

In contrast, the cross-functional teams are aligned on goals and objectives, they do not waste time in meetings. They do not need long meetings to resolve disputes among stakeholders or to update the status of the project since they are already aligned.

In an agile setup, meetings, in general, are brief and productive—for example, daily scrum meetings are often restricted to just 15 minutes rather than the common one-hour duration.

Since cross-functional teams don’t need to coordinate with other teams and divisions within the company, they can iterate faster.

For example, if a cross-functional agile development team is developing a web application for marketing automation, they may quickly create and test various facets of the development phase. Having designers, developers, and quality analysts all working on the same team allows them to create each version faster than they would if they required individuals from various teams.

Developing a technology solution or product has to align with the business strategy. Failure from the development or the implementation side will ultimately result in project failure. And that’s no good for anyone.

In such cases, the cross-functional attribute of agile teams comes to the rescue.

The biggest advantage of a cross-functional team is being able to cross-train without any extra effort. Businesspeople become more tech-savvy, and the technology side finally realizes the business importance.

The speed at which business is conducted continues to increase, and organizations must adapt faster to changing circumstances. Because of its global and systemic nature, no force has been more dramatic than the pandemic.

Cross-functional agile teams allow for more frequent communication and cooperation between team members, as well as an iterative problem-solving approach that allows the organization as a whole to change course more quickly.

Often it has been seen that projects are less likely to fail with cross-functional, agile teams. There is no circumstance in which you build a large software or feature that fails miserably.

You always know how your product development is doing thanks to its incremental development approach, and you can change direction if you do not get the results you want.

Because of iteration, you have a team that can efficiently address issues as they arise, whether it be a copy that does not convert or a code bug, you can fix them quickly and without wasting resources.

A waterfall approach to project development often prevents creativity and innovation. When team members focus on their individual areas of expertise throughout the project timeline, the product suffers.

In contrast, working on a project with people with different skill sets often leads to different approaches to problems.

For example, a quality analyst may have some suggestions that could improve the user experience of a page, but if they are not asked at the right time, their ideas may be missed. Likewise, a developer might know that a ready-to-go template could be used to test an iteration and save time that might be better used exploring fresh ideas for how to use it.

A team consisting of diverse, cross-functional individuals is more enthusiastic, dedicated, and passionate about their work. Because they feel a true sense of ownership over their work, they are more committed and more knowledgeable about what they do.

Of course, the benefits realized with cross-functional agile teams are promising. And as agile becomes more and more popular across the technology world, we’re expected to see more collaborative development teams.