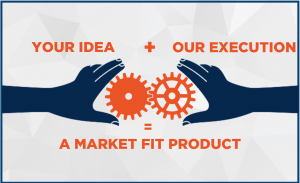 Sometimes unexpected opportunities come knocking your doors, especially when you are already maxed out. Something similar happened at Landbay, one of the fastest growing P2P crowd-funding platforms. Landbay had a unique opportunity to launch the first Innovative Finance – ISA (IFISA) facility in the UK. However, they were already maxed out on their existing product roadmap and had a month to launch the IFISA to its lenders. Recruiting ad-hoc resources, outsourcing the project or cutting the corners were completely out of scope; leaving Landbay to only one option – to turn to Innovify, its founding partner for product development.

Any shortcoming in the delivery process would’ve delayed the launch for Landbay. Knowing the project’s importance, we at Innovify got the ground running in no time and without any delay, we got its tech team together and connected directly with Jays Shortt, Head of Products and David, Head of Technology at Landbay.

The very first thing to be done was to set a clear target. Functioning as an emergency scrum team, we estimated the overall project, defined a high-level architecture, worked out all the dependencies and proposed a feasible timeline. The proposed timeline was a tad bit over the deadline, and hence the only resort left with us, was to scramble all our resources into this project, and develop at an accelerated pace.

That said, now we all were dealing with unprecedented challenges including:
1. Re-doing a lot of functionalities on existing platforms.
2. Dealing with a minimal learning curve.
3. High-quality requirements to meet the FCA’s guidelines and making a lasting impact on the end-users.

Adding to that, all of this was to be achieved in just one month.

To further complicate the matter, there was a dependency on a third party system for developing the core architecture. Though it enabled a faster delivery, it brought further complexities because now we had to synchronize between 3 teams, working in 3 different offices in 2 cities, having five and a half hours of time difference.

Everyone was now running against the time, and even a minute error could have jeopardized the entire process. Landbay, in a rather vulnerable position, wanted to ensure that all parties are getting the clear priorities and their respective work is defined, estimated and prioritized in a manner to eradicate any possible hurdle in the process.

Keeping this in mind, Jays visited our India office working closely with the team there and coordinating with the third party. Innovify, in return, provided with the best possible technology solutions, detailed acceptance criteria, highly confident estimates, clear communication and a truly agile way of working.

To ensure timely delivery, Innovify took the lead to:
1. Coordinate with the third party vendor on daily basis, clearly specifying the daily output needed as per the FCA’s guidelines.
2. Proactively identify any impediments and take steps to resolve those.
3. Actively report the progress to Jays and David, including the work from the third party.
4. Continuously deliver the work with daily demos, defects triaging and prioritizing in the sprints.

This was how Innovify’s extreme planning expertise along with timely coordination, enabled Landbay finish up with an updated platform which was developed on time and beyond the expected quality.
Unfortunately, Landbay couldn’t launch the product due to FCA’s delay in granting the license.

Nevertheless, this project is a noteworthy example of implementation of Extreme Programming (XP) and Lean principles to ensure the highest level of quality work product and an accelerated pace of delivery. It truly demonstrated the level of trust, communication and warm relationship required to make any Agile project a success.

This is simply to show how Innovify ensures Landbay, or any of its clients, to trust Innovify in meeting peak demand and expecting help in capitalizing unexpected opportunities, without letting them deviate from their existing priorities or from burning cash.

Innovify continues to work with Landbay and looks forward to many such opportunities.