FOUR WAYS TO GET THE EDGE ON THE COMPETITION 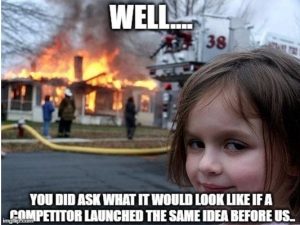 I thought I’d start the day with a positive suggestion (admittedly against the background of a burning building haha…).

Do something that your competitors can’t do, won’t do, or won’t understand.

Can’t do: if they’ve already determined a direction, it may be difficult or impossible for them to change….as an example, Facebook can’t imitate Twitter because they established themselves as a “friends-only” sharing tool, and every time they try to make your feed more public they encounter massive user protests.

Won’t do: do something that will seem to them to be insane or unprofitable. Disruptive technology is all about doing something that seems illogical or bad business to an established player because their economies or business model make it bad for them. But since you’re feeling brave, or just starting out, you can do it.

Won’t understand: every company builds up its own model of the world. All your competitors will have one. Their model might make it impossible to understand why your model will succeed until you have already gained so much traction that it’s too late. For example, perhaps you have figured out a way to provide a service for free that your competitors are charging for. Or maybe you’ve discovered some user behavior that seems illogical, like the idea that if anyone can edit an encyclopedia, you’ll get useful articles. Britannica didn’t see that one coming.

Listen to your users: any size of company can listen to their users. I’m not talking clicking buttons here, but task a team or individual who’s at the front line of customer complaints, or leaving as to why they’ve made that decision to complain or leave. Get them to do it for a couple of months and ask the honest questions. Hell, even give someone the list of people who’ve left or complained and ring back to dig a little further. Firstly, it’ll show you’re taking the customers seriously. Secondly, it gives you great material to act on. Buttons on a website, or buttons to click on an email survey are a cop-out, and it’s lazy.

If all else fails, talk to a team of UX professionals, and people who have been there and done it. If you want your business to succeed, no matter how large or small, you’d be silly to ignore the possibility of someone helping you to grow it, even if you’re not sure what will work.

Prakash Pilley is Head of Sales & Marketing at Innovify.com, where we help everyone from startups and beyond to realize their product-related ambitions, delivering real solutions for less. Get in touch with Prakash at prakash@innovify.com