14 Mistakes Entrepreneurs Should Avoid to Be Successful

According to a CBInsights report in 2021, the key cause of startups’ demise is that they run out of money and are unable to secure new capital. 38% of the 111 startups in their survey failed due to financial unsustainability; for example, Daqri spent $250 million and was unable to obtain new investments. Many other businesses worldwide also failed for the same cause. 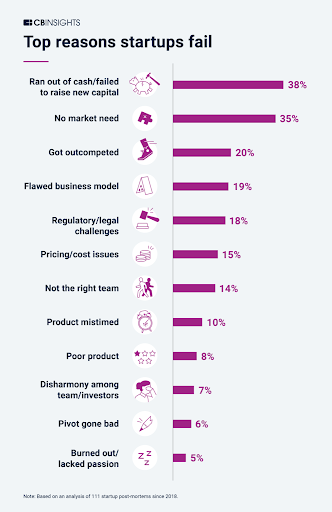 Moreover, fierce competition is also considered a significant reason for startups’ failures, which accounted for 20% of those that were closed.

Of course, starting a business is difficult, but there are many things entrepreneurs can do to help their company stay afloat and thrive in the long run. However, entrepreneurs often make a lot of mistakes and encounter failures as they pursue their objectives.

You may learn from your mistakes and avoid them in the future, but you will still face setbacks. The majority of entrepreneurs learn and develop that way.

However, when you are in the business world, you cannot afford to make mistakes continually. You must play smart to compete with other businesses, and you must be aware of some significant entrepreneurial mistakes that might destroy your startup.

Let’s discuss what mistakes entrepreneurs should avoid in order to build a thriving startup.

Entrepreneurs Should Avoid the Following Mistakes

Being an entrepreneur, you should learn from the following mistakes and avoid them.

Entrepreneurs often believe that less equity dilution will help them get further. In order to avoid unknowns, challenges, or delays on the way, they forget to account for them. In spite of the fact that startup leaders usually are optimistic and envision the best-case scenario, it rarely occurs.

This mindset appears to result from leaders’ positivity and their drinking Kool-Aid. Positivity has its proper place, but it often results in having to return to the well for a poor raise when it comes to capital.

Regardless of the nature of the startup, there will be a need for technology, whether in operations or marketing.

From building a website to integrating CRM and other enterprise software applications, startups need assistance in terms of picking the right technology stack, building the architecture, and even coding.

Many entrepreneurs make the mistake of hiring in-house technology resources and planning the entire technology ecosystem by themselves. But, building the tech ecosystem for a startup requires expertise in order to build the best product.

This is where entrepreneurs should consider outsourcing IT work to experts like Innovify. This will enable entrepreneurs to focus on other core activities of their startup, like customer acquisition and other critical operations.

Product development companies like us have already experimented with several technology stacks and know what’s the best for you.

3. Not Spending or Overspending

We usually see two perspectives among new entrepreneurs we consult: “You have to spend money to make money” or “I will invest as little as possible until I have a decent cash flow.”

Both of these mindsets can be dangerous if taken to the extreme. It’s OK to spend your startup money wisely, but don’t be reluctant to invest in great people and quality products. That will pay off in the long term.

Before they begin their startup, entrepreneurs should be aware that their investors are more than just financial backers. These individuals will determine whether a company thrives or fails. The first set of investors will either make or break a company.

Without having proof of concept, these investors place their trust in the company’s potential. Once a business has completed its seed funding, investors will examine its development and longevity and think about continuing the funding to series A, B, and so on.

Hence, it’s essential for entrepreneurs to partner with investors that have a track record of backing successful startups.

For example, TSVC (a successful venture capital firm with over 231 investments) and four other investors placed their bet on the idea of a video conferencing platform which ultimately became Zoom. And we all know how successful the startup was.

Quibi, a mobile-focused streaming service that shut down in October 2020 after raising $1.8B and operating for just six months, is a great example of entrepreneurs making this mistake.

As stated by Quibi’s chief executive Meg Whitman and founder Jeffrey Katzenberg, there were ‘one or two reasons’ for Quibi’s failure: either the idea behind Quibi wasn’t strong enough to justify a standalone streaming service or its launch in the midst of an epidemic was particularly inopportune. They suspect that it has been a combination of the two, but we will never know for sure.

Cases like this clearly indicate that even the most promising products can fail due to a lack of market demand. Hence, it’s always recommended for entrepreneurs to conduct a market study and know the present and future demands of their customers.

6. Not Considering the Upcoming Competition

Despite the common belief that startups should not concern themselves with the competition, it is often the case that competitors will try to benefit from an idea’s popularity or market validation once it becomes hot. Also, obsessing over the competition is not healthy, but it also proved fatal in 20% of startup failures.

Entrepreneurs new to the scene may be so enthralled with their new product or service that they believe they have no rivals or that their item is so far ahead of the pack that it stands alone. In reality, it’s unusual to be without direct competitors.

Unless you’ve developed a totally new product, there will be someone in your sector which already has market share. Hence, do your research to find out who these companies are and how you might differentiate yourself.

Even in new industries and market niches where innovation is the key factor (i.e., AI, Blockchain, etc.), startups often negate the fall of entry barriers which leads to new competitors overthrowing them.

7. Not Verifying their Business Model

Entrepreneurs who failed agree that having a good business model is crucial— adhering to a single sales channel or not finding methods to generate large amounts of income prevented investors from being receptive and entrepreneurs from taking advantage of any early interest.

For example, Aria Insights’s idea of equipping drones with sensors to collect data from extreme environments seemed promising. However, the company struggled to find a compelling use for that data and consequently couldn’t adequately monetize its business model, which resulted in the loss of a few high-profile investors, including Bessemer Venture Partners.

There are a lot of examples of startups failing due to inadequate business models. Hence, it’s mindful for entrepreneurs to verify the feasibility of their business by starting small or doing proof of concepts.

8. Not Defining the Target Market and Customer Base

It’s a common mistake for entrepreneurs to ignore the demands of their consumers or the market. We’ve seen that for most tech entrepreneurs, talking to customers rather than writing code seems simpler, but you won’t know if you’re on the right track unless you continuously seek feedback from current and prospective clients.

You may not realize that producing a fantastic product doesn’t necessarily result in a profitable company. Many enterprises discover that they’ve targeted sectors that are too small to support a major business.

Many entrepreneurs don’t create a business plan before they begin because it takes time to build a perfect one. However, a simplified one or two-page plan is enough to get started for most startups.

Creating a complex 10-page business plan is a slippery slope because it is an obstacle to action. Many investors prefer a two-page plan (to glance over the business idea) to a 10-page plan because of its less complexity.

You will not survive long as an entrepreneur if you don’t have a plan, whether it’s two pages or ten pages long. Many entrepreneurs make it up as they go, and it’s okay too.

Entrepreneurs often make the mistake of trying to operate completely independently without seeking advice from leaders in the ecosystem (i.e., suppliers) or hiring capable employees with the right qualifications early in the game.

If the founder is unable to trust that the person they’re delegating to will handle the job, they will be forced to handle a multitude of things that are not their top priorities.

Hence, it’s imperative to master the skill of delegating work because the company can only grow if the founder properly shares the responsibilities.

Even if the entrepreneurs make the right decision of delegating their work by hiring people, there are chances where they don’t hire the right people.

A poor hire at the outset can doom a startup before it gains traction. According to the U.S. Department of Labor, the average cost of bad hire is 30% of the employee’s first year earnings (compensation), which is unbearable for startups.

First-time entrepreneurs tend to hire people who are enthusiastic about their idea rather than those who have the skills to help realize that vision and implement it with discipline and responsibility.

Hence, it’s recommended for entrepreneurs to follow these steps while hiring people:

12. Hiring Based on Cost

This mistake is tied to the previous one, but it’s very prevalent that it needs to be mentioned separately. When money is tight, it’s tempting for entrepreneurs to cut down on the price of new hires.

The problem with this method, however, is that they end up paying dearly for these low-cost hires in the long run. Individuals and consultants who are low-cost have a reason for being low-cost — they are more likely to be unskilled, inexperienced, or unreliable (or all three).

Entrepreneurs may become so captivated by their “big idea” that they work without a sound plan. Instead, they must establish realistic and achievable goals in order to succeed.

It is important to establish both short- and long-term goals and make them specific. Don’t just say, ‘I want to make $1 million this year.’ Instead, set an achievable goal, then determine what steps you must take to achieve it.

Entrepreneurs who are just starting out often believe that if they build their product, customers will come. Loving and believing in the thing that you’ve built is natural. This is why most entrepreneurs fail to realize that startups need to spend heavily on marketing in order to gain a competitive advantage, spread product awareness, and more.

Most of the time, the marketing efforts include SEO, content marketing, PR, and paid advertising. Entrepreneurs should consider how they can compete and differentiate themselves from their competitors and see where the competitors are investing their marketing dollars.

As better as it is to avoid mistakes, entrepreneurs shouldn’t be afraid to make mistakes; instead, they should learn from them and pivot their business model as needed.

Test out new ideas and gather feedback in order to adjust your product to better meet your customers’ needs. While there are several startup mistakes to avoid, occasional errors are inevitable.

Don’t be too hard on yourself during the process. One of the greatest things you can do is accept bad news, learn from it, and use it to your advantage. If you think this way, business success is right around the corner.